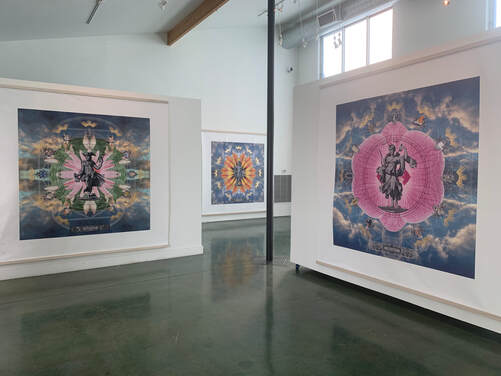 ​ What comes around, goes around. In these strange and revolutionary times, we tend to examine the past for causes and clues. How did we get to this place and what could we have done differently? Does history repeat itself, or are we capable of forging a new path?

Sonoma-based artist Peter Hassen is delving deep into our collective karma with work being installed as part of an upcoming residency at San Jose’s Art Ark Gallery. The exhibition will feature prints, mixed media, sculpture and video that explore cultural phenomenon, spiritual practice, scientific discoveries and climate predictions in search of indicators for future progress.

A series of sculptures titled CYCLES are based on mandala-like patterns representing the evolution of science, the patterns of geometry, and the possibility of extinction. The spherical shapes are made up of three disks laser-cut from wood, aluminum, glass and steel which intersect to reveal new dimensions. ​

The mandala-like patterns that form the basis for CYCLES are repeated again in the 6-foot digital collage series FUTURITY​. These works are based on themes inspired by the social satire of the French Enlightenment and address the philosophies that have shaped modern thought.

“Peter Hassen’s Futurity series acts as a kind of portable tongue-in-cheek set of talismans--rich visual landscapes that collapse time and culture to reinterpret our contemporary socio-political moment and prompt a rediscovery of our own place in the continuum of life.”
--Curator, Amy Owen

Hassen also looks ahead, following signs offered by the Indicator Species: Bees, Birds and Frogs. In a new series of screen-prints, he uses silhouettes of these creatures because they are like the “canary in the coal mine” regarding actions taken by humans and the threat to our own species.

In one print, text refers to the French intellectual Voltaire who writes that “There is no effect without a cause.” Hassen likes to raise questions about societies, cultures, and their commonalities. He leaves the question open-ended to let the viewer discover their own rational for human causes and effects.


About the Artist
Peter Hassen was born in Cincinnati, OH and graduated from University of Colorado with a BFA in Studio Arts and a minor in Religious Studies. Since the early 90s, Hassen has been involved in various conceptual and public art projects that comment on social and environmental issues. In 2009 he started a series of landscape interventions throughout the American West that invite discovery and contemplation (Sacred Sculpture Project and Discovery Series). In 2012, he launched The Values Project which got communities in Napa, Sonoma and Sacramento to identify shared values and paint words such as Gratitude, Tolerance, Charity and Compassion in public parking lots.
In 2019 Peter was a resident at the Voigt Family Sculpture Foundation, and his work has recently been featured at the Marin Civic Center, Bolinas Art Museum, Bedford Gallery, Marin Art and Garden Center, and AXIS gallery.